Non-steroidal anti-inflammatory drugs that are abbreviated as NSAIDs belongs to the drug class that are known to provide fever reducing (antipyretic) and analgesic effects. If these medications are taken in high doses, they also work as anti-inflammatory agents.

As these medications are non-steroidal which means that they are non-narcotic they have the added benefit of being used as a non-addictive alternative treatment to narcotics.

This quality of NSAIDs also makes them an over the counter medication, that means one does not need a prescription from a doctor to buy them.  Aspirin, naproxen and ibuprofen are examples of NSAIDs that can be bought over the counter. 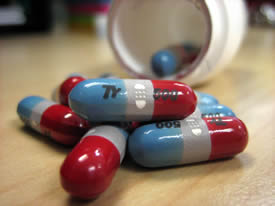 As NSAIDs are anti-inflammatory in nature, they are commonly used as a medication for the treatment of upper back pain. Let us not forget that these medicines do not cure the thoracic back pain but may provide enough relief to the patient by reducing the inflammation the effected spinal area so that the patient can respond to his rehabilitation and treatment program in a better manner.  NSAIDs are quite effective in helping patients get relief form mi to moderate thoracic back pain that can occur due to a tissue injury as well as inflammation.

Side Effects of NSAIDs